Monkeypox is a zoonotic illness caused by the monkeypox virus, and it is the most common orthopox virus infection after smallpox was eradicated. Cases of the monkeypox virus have been reported outside of Africa, in nations where the disease is not prevalent, such as Europe, the United States, and Latin America. Can this be start of a pandemic?. The World Health Organization (WHO), which is closely monitoring the viral outbreak Monkeypox, a smaller version of Small pox, has stated that it is unlikely that the outbreak would spread beyond Africa. More than 300 instances of the Monkeypox virus have been reported thus far, both suspected and confirmed. The virus is endemic in Central and West African countries; however the majority of cases have occurred in Europe. Close contact with an infected person is regarded to be the most common method of human-to-human transmission. Transmission may occur during sexual intercourse, according to some evidence. Bites and scratches, bush meat processing, direct contact with bodily fluids or lesion material, or indirect contact with lesion material, such as through contaminated bedding, are all possible ways for animals to transmit disease to humans.

WHO. Multi-country monkeypox outbreak in non-endemic countries. Available from: https://www.who.int/emergencies/disease-outbreak-news/item/2022-DON385 [Last Accessed on 21st May, 2022] 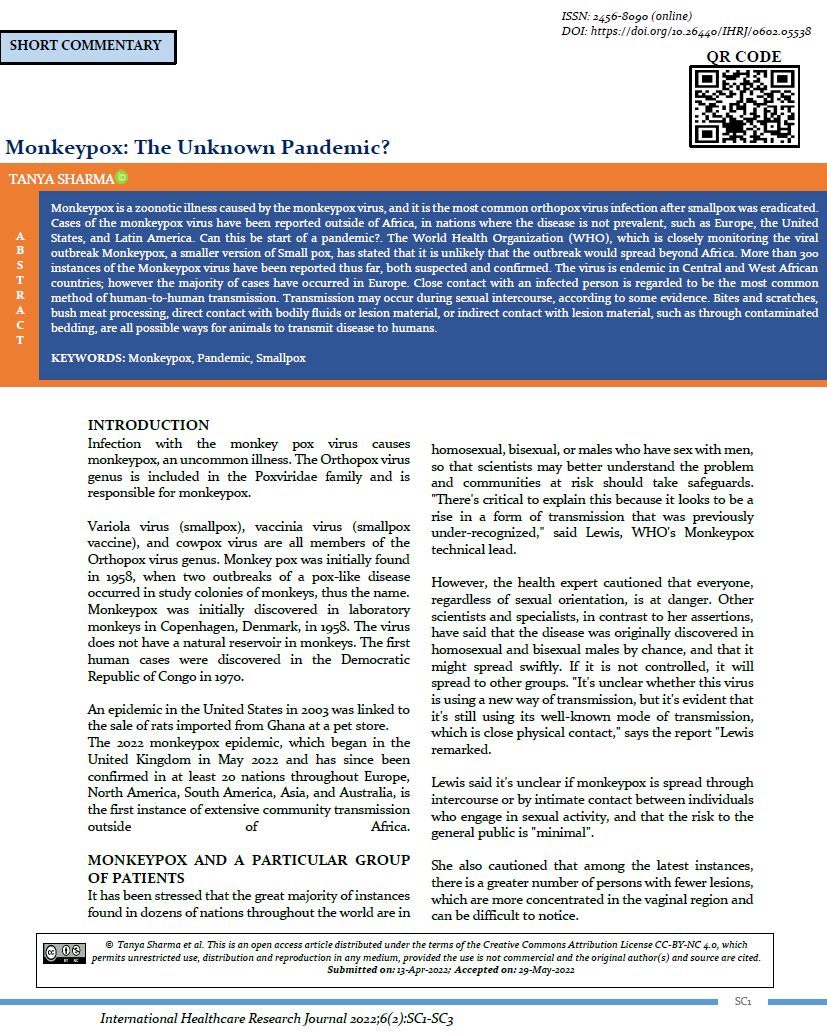 This work is licensed under a Creative Commons Attribution-NonCommercial 4.0 International License.

Best viewed through Internet Explorer 9.x or higher, Mozilla Firefox® 16.x or higher, Safari 5.1 or higher, Chrome 23 or higher, or an equivalent browser software. If your browser is older, you may have trouble viewing many of our web site features properly. If you are unsure of the version of your browser, you can determine it by choosing 'Help' at the top of your browser window and then selecting 'About' (your browser). Browser Upgrade Information is available by clicking on the appropriate link above. This web site is best viewed on any screen size and resolution as well as any operating system that support web browsing.
© 2020 - All Rights Reserved | Version 20.02.01
Yellow Loop| SysNano Infotech